A workflow is more than a process (in other words, how you benefit from workflows)

Business processes must respond dynamically to your business. Thus, you must have the flexibility to control them in automated workflows. To facilitate the introduction of workflows to your business, let's take a look at what distinguishes a process from a workflow and what role your documents play in it.
The words "process" and "workflow" do not mean the same thing, although they are often used interchangeably. A process describes the basic business management question of which steps to implement, and in which order, to achieve to a specific result.
In contrast, a workflow refers to the technical, automated implementation of a process by using software – like DocuWare Workflow Manager. The tasks of the transferred process are transparent, predictable and standardized. Any deviations are clearly defined and flagged.

The big advantage of automated workflows

With a workflow management system, you can map and manage even the most highly complex processes. This level of control is one of the biggest advantages of workflow management, because it allows you to incorporate a wide range of scenarios for processing tasks. Information from various sources can be included. Here is an example: To ensure that no task is left unfinished when employees are absent, Workflow Manager lets you set up a series of substitutes – so that the task goes straight to the next responsible person (without a manager‘s intervention).

In Workflow Manager, you use the integrated Workflow Designer tool to define the settings for a workflow – such as which decisions are to be made and which conditions are to be applied. You can also set certain variables/placeholders, which are filled with values like partial invoice amounts that can change dynamically.

Using the life cycle of a document as a workflow blueprint

Most business processes are based on documents which are organized in different categories, such as invoices or contracts. An invoice receipt process is a good way to track which processing steps this type of document goes through in a company, until its active lifecycle has ended. Basically it has ended when it no longer needs processing and only has to be passively stored in the archive. In general, an invoice process is well-documented, which also makes it ideal for transferring into a workflow.

So let's take a look at invoice processing and break down the most important steps in a workflow. Each invoice passes through different stations: 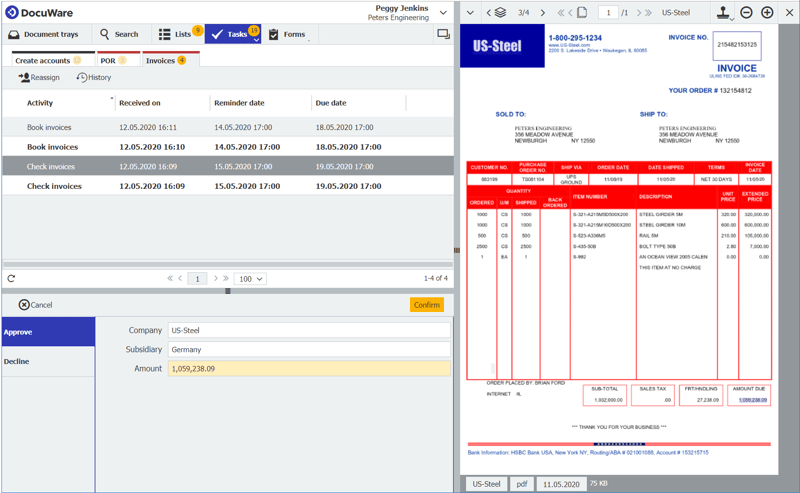 The task of checking an invoice appears in the Accounting Department‘s task list in DocuWare Client.

As you can see, all the tasks in the workflow are based and triggered by a document – in this case, each individual invoice – and linked to it.

Workflow configuration and workflow instance - what are those?

In everyday office terms, "workflows" are often used to refer to what are considered instances. This sounds complicated at first, but it isn’t really. Workflow actually stands for two things: 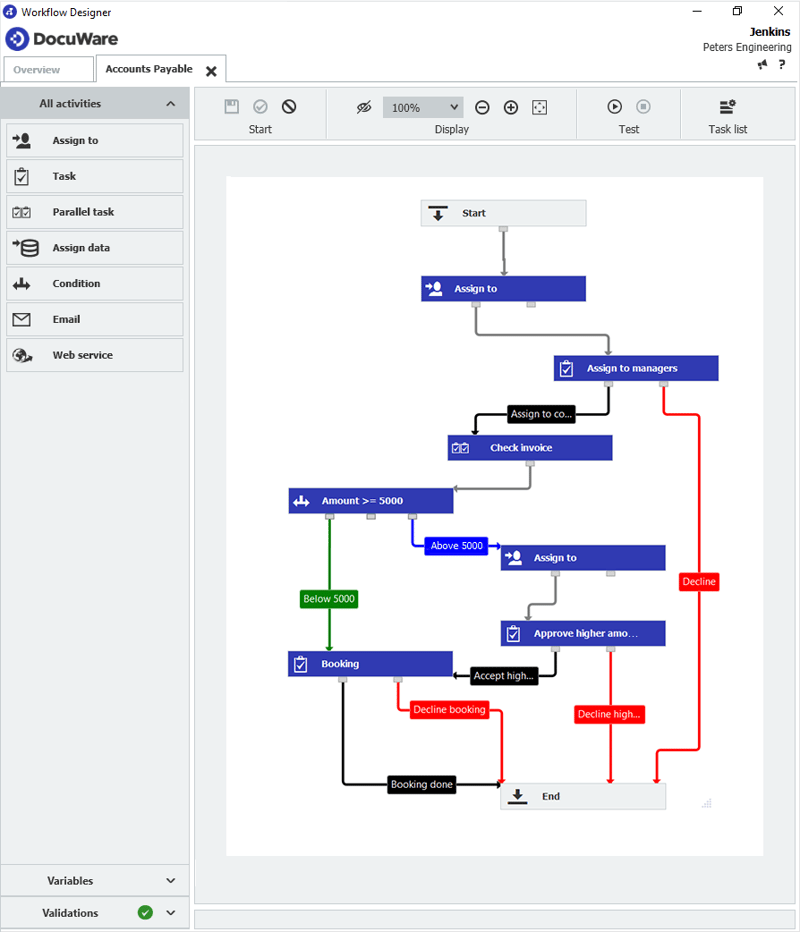 The Workflow Designer is used to create a flowchart mapping each individual step - in this case, for incoming invoices.

For a workflow to automatically trigger the next step, it needs information that serves as criteria for its decisions. There is information data – like company names and invoice amounts – that DocuWare has captured from a document, or cost centers that were fed into the workflow when it was created, which are actively added to the workflow from external sources such as a database.

Added to this is the process information or data that a workflow system creates itself. These arise, for example, when a partial amount is deducted from a total amount in the invoice workflow so that the next user in the series only sees the remaining amount that still needs to be released.

Once implemented in workflows, your processes run faster and more reliably and enable further success for your company.
With DocuWare Workflow Manager, you can also...

Read more about creating Workflows with Workflow Manager in general.

UserInfo is a monthly email newsletter that provides tips and news for DocuWare users and admins.